The past two weeks have been absolutely insane. I've been making videos on this website for months and for the most part, I was just making them for fun. I was averaging 1-5 thousand views per video, and I was pretty content with that. I knew growing on a new platform would be a slow process, and I had no problem putting in the work for a while before getting any real recognition.
But then.... everything changed. HRvid started recommending my videos to people and all of a sudden I was gaining almost 10,000 subscribers per day.
Want to know my secret?
......
So do I.
I don't know what happened lol. But thanks guys.
------------------------------------------------------------
In this video I struggle with the idea of overfortnight (a word I just made up) internet fame, and then try to maintain humility by diving into some of the hate comments and offering a few comments of my own. I guess you could say I'm "reacting to comments" or something like that.

Oh my gosh, you do look like that guy. But you're eyes make it look like you're sad inside

Oh Em Gee you grew fast!!!! But a lot of people who grow very fast to me already have a great fan base elsewhere like some people have so many people on Instagram or TickTock and they will just bring those subscribers over

Let's support each other and grow I am LOYAL and FAST

there's a thunderstorm going on over her right now

there's a thunderstorm going on over her right now

on my iphone channel i have 3 subs

I have 3 subscribers 😆😆😆 I'm curious as to why, are they watching my playlists? Do 3 people in the world agree with my playlists so much that they said," My gawd son I don't need to explore we can just watch the Alpha channel"? Either way I'm not so much concerned with fame, infamy is more of my life's ambition!

and his shirt matches...

Hi, i know a trustworthy service to raise your svbscriibers naturally crazy retention i have used 40 times so the service is called - *RazorViews*

Grandpa's such an asshole.

"those jokes were really funny but really stand up?" what, you want me to do in bed comedy now, karen?

And she bought me the batmobie

"your eyes only look precariously placed in your head" omfg makes me howl because I relate. My eyeballs literally look like thye're going to drop out of my skull. Legit yours look like normal eyeballs. I really need you to make more content. You legit make me howl with laughter

Uninteresting fact: The moment he talked about brushing his tongue, I stood and cleaned my tongue with my tongue scraper 😝 For me it is a given to clean both teeth and tongue. Feels fresher that way.

Teachers: Treat of people how you I want to be treat People how leave hate comments: no, I don’t think I will

fuck dude, i actually thought him calling himself while he was driving was him calling danny .... tbf tho i didnt have my um, eyes open

im watching this in 2020 and drew has 2.1 mil subs. im still traumatized by the wrath of the mustard.

Me watching you when you at 2.1 million subs years later “that’s our boy, look at our boy, I’m proud of our boy”

i'm not a little stinker

You were the road work ahead guy. That’s why. Your whole career really bases off of that lmao.

so we just gonna ignore how he said fa****

in Indonesia (or maybe in other countries aswell), we design these- _tounge brushers_ on the back of some toothbrushes. So, yes, i do brush my tounge, and yes, it makes me gag, but yes, my tounge is clean.

2.09 Million as of February 2020!!! Sadly the PewDiePie/T-series and James Charles/Tati situation have pushed HRvid into taking away live sub counts. Now it is rounded up to the nearest hundred, thousand, hundred thousand, million, etc. Congrats on 2.09, you are close to 2.10... I can feel it!!!! 😆

I love Sheldon cooper tho

The origin of little stinkers.

man this video aged poorly. he has 2 million now.

Oh how little he knew

The confidence meter was a rlly good touch

he used to seem more bitter

Ahh yes the origin of the little stinkers

"I would come up with a name for my fanbase if it didn't immediately make me hate myself for even thinking of that" PREACH IT BRO. This is probably why I never ended up famous, because I didn't come up with a cutesy name for my followers...like, "Toppers" or "ToplessArmy" ...

Also, speaking of comments on appearance, this whole video has been tripping me out with how much you resemble David Bennett aka "The Spine" from Steam Powered Giraffe. Face and mannerisms both...

Whelp better start preparing that 3 million subscriber video now, you're only .2mil away!

I've been brushing my tongue since in like 3rd grade a lady with a giant toothbrush showed us the proper way.

If you don't brush your tongue you are a disgusting human being. I imagine these same people don't change their bed sheets for 6 months.

you brush your tongue too? i thought i was the only one hahah

Wait, what if I already liked the video? How do I like it again?

No idea what I just watched, not what I came for... but god I’m glad I clicked on this 😂 I haven’t laughed at a video like this in ages 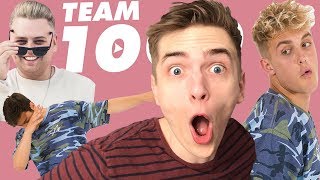 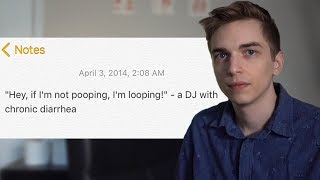 14:53
Why Did I Write That Down? | Reading My Old Terrible Jokes
Pregleda 2 mil. 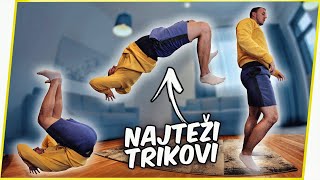 13:36
The World's Dumbest Article Used Me As Clickbait
Pregleda 2,8 mil.